The Time Is Now!

No matter the season, the Mexican Caribbean is an ideal vacation destination

For the best prices with reasonably low crowds, November and early December are perhaps the best times to visit the Mexican Caribbean. Prices are noticeably higher during the busy season of mid-December to April. Surcharges are also common around Christmas, New Year's, and Easter.

As in most places in the Caribbean, the weather in the Mexican Caribbean doesn't vary much from season to season. The difference between average temperatures in the summer and winter is only about 10 degrees Fahrenheit, so the high season for tourism is dictated more by the weather in other places than in the Caribbean. Winter in the Mexican Caribbean is like the month of May in much of the North American Southeast, with an average temperature hovering around 75 degrees Fahrenheit (24 degrees Celsius). This makes winter the most popular time to visit, as North Americans escape the freezing temperatures of their hometowns.

Summer brings humidity and hotter temperatures, and both summer and fall have a greater chance of rain than other times of year. The hurricane season officially lasts from June 1 to November 30, but that's no cause for panic. More hurricanes hit the U.S. mainland than hit Mexico, and today's meteorological technology usually provides warnings in more than enough time to take proper precautions.

The crowds are the most obvious difference between visiting during the tourist season versus the off-season, and this difference causes more changes than you might initially realize. Whether you consider these differences to be beneficial or not depends largely on your travel perspective.

Visiting the Mexican Caribbean between December and April in the high season of tourism is quite an experience. The most popular tourism destinations like Cancún and Cozumel are filled with hustling, bustling myriads of vacationers, all reveling in the beautiful weather and the Caribbean experience. Hotels, shops, and restaurants offer their most extensive service with a smile. The crowds can be exciting and exhilarating, but also a little daunting. This is definitely a time for small groups: singles, couples, or groups of friends who can navigate the islands with ease. The dating scene is also livelier in the high season, whereas it might be harder to meet people in the off-season.

Everything is more competitive in the high season. Accommodations and flights should be booked at least two or three months in advance, and even earlier during certain times. Reservations are necessary, transportation is stretched thinner, and tours are generally more crowded. This is when the islands make most of their money, so they roll out the red carpet for every guest.

While the high season is exciting, the off-season may be more indicative of the true Caribbean. With diminished crowds, a less-hurried, more quintessentially Caribbean way of life prevails. The only exception to this may be Cancún, which was built as a tourist destination from day one, and doesn't retain as much of the local culture as, say, the Riviera Maya.

During the off-season, midday temperatures may rise to an uncomfortable 85 to 90 degrees Fahrenheit, but the Atlantic trade winds keep the mornings, afternoons, and evenings extremely pleasant along the coast. Trips to the interior of the peninsula, however, can be stiflingly hot and humid without the cooling effects of the sea breeze. Hotels and resorts may reduce their services and diminish their staff during the off-season, and some tours or activities may be closed altogether. Hotels also reserve their major repairs and renovations for the off-season, so it's a good idea to call ahead to make sure you won't be staying in the midst of a construction site.

On the flip side, traveling in the off-season can be much cheaper. Hotels cut their rates from 20 to 60 percent, and tours and shops may cut prices to remain competitive. The off-season also brings easier access to public transportation, tee times and golf courses, tennis courts, water sports, and other activities. Flights and accommodations are easier to book. You may even be able to get a table at a nice restaurant without reservations. This is a good time for families to travel because it's easier to keep track of children and there are fewer crowds to fight. The atmosphere is more cosmopolitan in the off-season as well, since a greater percentage of the tourists during this time are European.

Many people plan their vacation to the Caribbean around a certain event or festival. The high season is filled with events like Revolution Day, a national holiday that commemorates the start of the Mexican Revolution in 1910 with parades, speeches, rodeos, and patriotic events. Of course, Christmas and New Year's are also popular holidays. Carnival in February fills the three days leading up to Ash Wednesday with revelry, dancing, and costumed parades reminiscent of Mardi Gras in New Orleans.

In late May, visitors can experience the Cancún Jazz Festival. Events such as Independence Day and Día de la Raza also occur in the off-season. Other carnivals, festivals, sailing regattas, holidays, and fishing tournaments take place in the Mexican Caribbean throughout the year.

Whether you choose the low season or high, traveling to the Mexican Caribbean is always an experience.

Help us improve! We welcome your corrections and suggestions.

Vacation Decisions
Before leaving for Cancun and the Mexican Caribbean take a few moments to decide on the most important aspects of the trip.

Budgeting
Plan in advance to ensure you make the most of your money when vacationing in Cancun and the Mexican Caribbean. 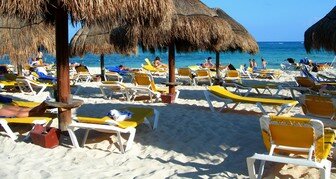 Requirements and Traditions
Packing
Why Not Go?