Culinary Styles of Cancun and the Mexican Caribbean

Travelers can experience many culinary styles in the Mexican Caribbean

Mexico's culinary styles vary greatly. In Mexican Caribbean areas like Cancún, which was developed to encourage foreign tourism, travelers will find food with more of an international flare. However, out among the small fishing villages of the coast, your taste buds will experience a truer Mexican flavor.

While large American chains such as the Hard Rock Café may dominate the culinary scene in the tourist locales, there will be plenty of other cuisines available. It is also easy to find traditional Mexican dishes, from tacos to foods seasoned with local chiles.  Don't be fooled, American and other westernized Mexican restaurants rarely serve traditional Mexican fare. Restaurants serving "Tex-Mex" foods may even name modified dishes with traditional names, so be sure to order with care.

A majority of Mexican dishes focus on corn (maíz) and beans, as well as chiles. Chiles, however, are not always spicy, nor is Mexican food as consistently spicy as one might think. In fact, a common travelers complaint is that the food is too bland! There are approximately 100 varieties of chiles used in Mexican cooking, from the largest, stuffed for chile rellenos, to tiny and spicy varieties.

Salsas made with chiles will be found on the table of each restaurant, and are almost always homemade. Some may be spicy, but they are often quite mild. You can season your dishes to taste with these salsas, which will be different at each restaurant you visit.

Another famous sauce made with chiles is mole, which also includes chocolate among its list of approximately 50 ingredients. Mole is most often served with poultry, and is considered to be the national dish of Mexico. You might also try the national specialty, chiles en nogada. This dish features the colors of the Mexican flag, and is an unusual mixture of flavors: Stuffed green peppers covered in a sauce made from walnuts, cream cheese, and sour cream, and topped with a red pomegranate.

One of the largest differences between western Mexican foods is the seasoning. The achiote, from the annato seed, was first used by the Mayans. The seed is made into a paste, achiote, with water or vinegar, cinnamon, salt, and cloves. Achiote is often served in tamale tip and rice dishes. You may also want to consider birria, a seasoned and spiced goat stew, or pozole, red pork and hominy heavily spiced with chiles.

Beans are served with or in nearly every dish, often refried. Most often the beans are pinto or kidney beans. They are also found in local stews.

Corn is used in many forms, whether eaten on the cob (elote) from roadside stands or ground into tortillas. It is found in stews as well. Flour tortillas are found for the most part in tourist-oriented areas and in the north, and are certainly less traditional. Corn tortillas may accompany meals, much like a bread basket accompanies meals in other cultures. Cornflour is also the basis for tamales.

The ingredients discussed above are combined in a number of different ways to create an endless supply of meals.

No matter where you travel, from tourist-oriented Cancún and Cozumel, to the laid back Playa del Carmen and Mayan Riviera, you're sure to find one thing: drinks. Whether fresh fruit juice or something more potent, there's a libation to serve every palate. From strawberry and pineapple juices to guava, tamarind, and Mexican sangría soda, the range of flavors starts at the familiar and ends in the exotic.

Jugos (juices) are made from any fruit, and even vegetable, you can think of. However, another interesting choice is a licuado. These shake or smoothie-like drinks can be made in a blender with either water or milk, and often sugar is added. Other drinks, like agua de arroz, are unique to the region as well and certainly worth a try.

However, cold drinks are not the only unusual refreshments available. Hot chocolate made with dark chocolate and café con leche (a sweet coffee and milk drink, sometimes made only with milk) are widely available. Coffee here is a bit stronger than you might be used to, so if it is too strong, ask for café americano, though be aware that this might mean you'll get instant coffee, which is referred to as Nescafé. Other drinks include the vanilla flavored atole and chocolate champurrado. These drinks are both thick cornmeal beverages.

When in Mexico, it might be hard to pass up a chance to try its signature liquor, tequila. The José Cuervo brand is popular in the United States, but many other options are sure to be available in tequila's homeland. Sauza's Hornitos and Conmemorativo are among the most popular brands locally. Mexico is also known for its rum brands, such as Porfidio or Kahlua brand's Kuya Fusion Rum.

Other liquors that are less famous outside Mexico are mescal (often spelled mezcal) and pulque. Mescal is very much like tequila, since tequila simply originated as a variety of this drink. In mescal you will certainly find a worm at the bottom of your bottle as proof of authenticity. Pulque is only mildly alcoholic, and is a beer with a milky texture made from the same cactus as mescal and tequila.

In a restaurant you're sure to find a selection of cervezas (beers) and sometimes wine as well. Cervezas are widely considered very good, and are often light, though some darker varieties are available. Local wines are good, but not widespread. Some chains even sell liquors and mixed drinks alongside beers and wines, however, be prepared to pay more for liquors not made locally. Surprisingly, there are local distilleries for both brandy and vodka.

In Cancun especially, hotels often have restaurants on site, serving up many of the fabulous dishes. Search restaurants by name, or if you are interested in a particular cuisine, click here.

While those with an adventurous spirit can take on local dishes and drinks, those who prefer to stay close to home can find what they like as well. Especially in the tourist zones of Cancún and Cozumel, your dining wishes can be easily fulfilled in the Mexican Caribbean.

Help us improve! We welcome your corrections and suggestions. 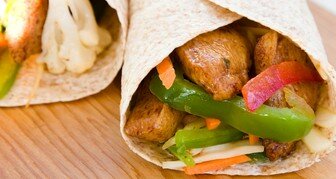 Food
Restaurants
Why Not Go?